A large part of Celeste is its mood and atmosphere. We’re trying very hard to make it feel like you’re exploring (and overcoming) a Mountain, and so lighting plays an important role.

We decided early on the lighting had to interact with the environment. As the game is about maneuvering and climbing through difficult terrain, having simple “Spotlights” wouldn’t cut it — the lights needed to actually hit walls. 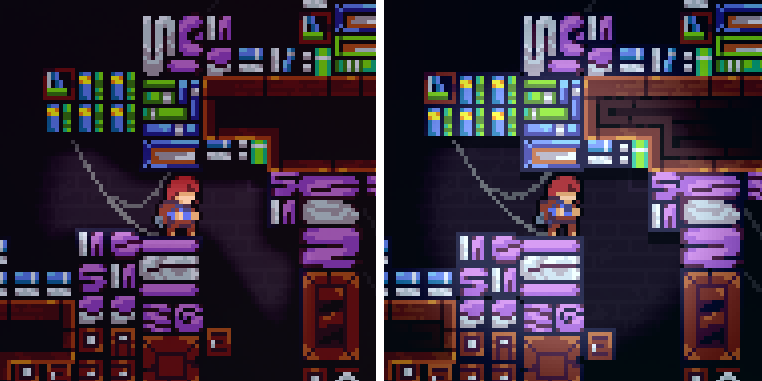 Left: Lights that collide with the terrain, Right: “Spotlights” that have no ineraction

My first implementation of the lighting was fairly complicated. I wanted something that would be fast and allow us to have lots of lights, so I decided the best way to do this would be to construct a Mesh for each light, and draw them all at once.

Which worked like so: And this worked pretty well! We used this method for over a year. But it had a lot of edge cases, bugs, and floating point precision problems (for example, if two raycasts landed at the same spot on a surface, or if two solids were overlapping or touching, you only want the outline of their shape, not the parts of their walls that intersect).

Due to all the subtle problems, I recently decided to re-implement the lights entirely using a different method. Instead, what I would do is draw the “spotlight” of the light first to a texture, and then all the surfaces would draw their shadow projection (each just a single quad) “on top”, cutting out the spotlight. 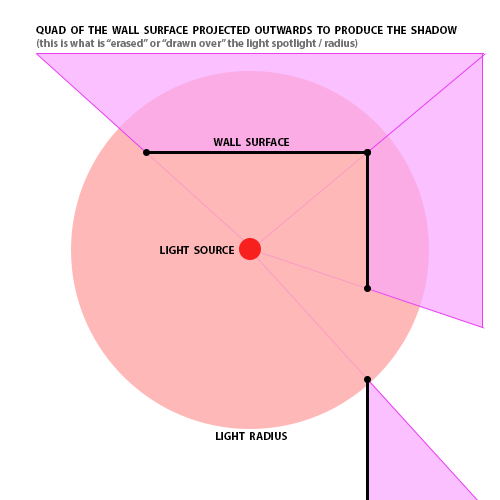 The result, after the light has been drawn and walls have erased their projected shadows, looks like this: 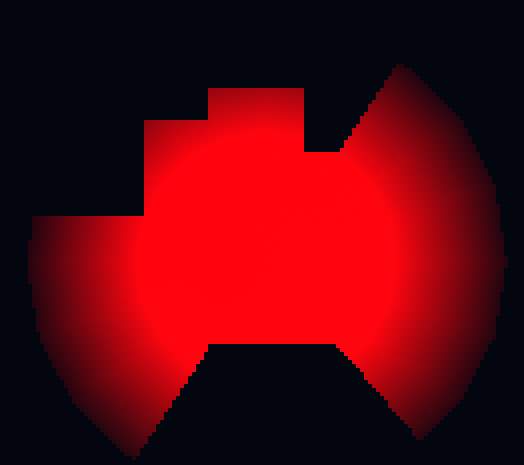 Red is just the mask representation of the light, not necessarily the final light color

This works super well, and is a much simpler solution. However, using the previous Mesh Implementation, I could draw all the lights in a single draw-call since they were just a bunch of vertices. With this Cutout Implementation every light needed to be on their own texture (or a single texture where you swap between the screen and texture for each light).

There’s some places in the game that have a lot of lights. It didn’t make sense to have to swap between textures all the time. It’s expensive, and I’d like the lights to have little to no impact on the performance of the game.

The first optimization is realizing that the mask of the light doesn’t need to use all the channels on a texture (Red, Green, Blue, Alpha), but rather only one. If each light only uses a single channel, we can actually draw 4 overlapping lights per texture: 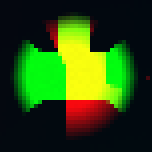 2 lights on the same texture

Above are 2 separate lights, drawn overlapping on the same texture, one using the Red Channel for its mask, and the other using the Green Channel. When the game draws the light to the screen, it simply uses the channel as a mask (I have a shader that draws the light’s color, but multiplied by the mask of the channel).

We can now have 32 lights, but only use 8 textures, which is a pretty nice improvement! But I wanted to find a way to cut it down even more. 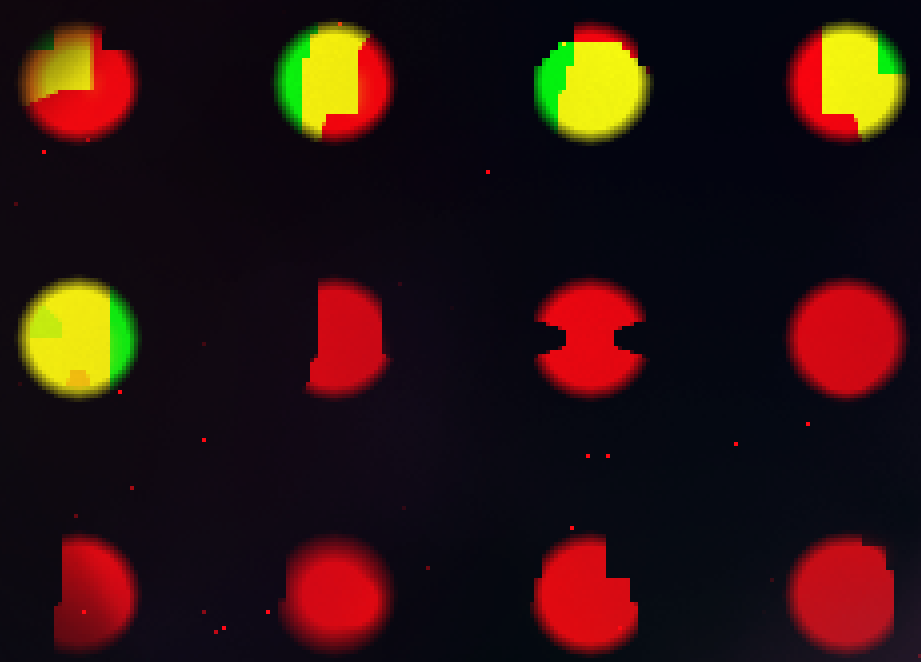 This allows me to still draw all the light masks in one big pass, and then again in another single pass to the game screen, and I don’t have to be swapping textures a million times.

This method ends up being a lot faster than the Mesh Implementation, as there’s a lot less work on the CPU (constructing all those meshes), and only a minor hit to the GPU. The lights are now some of the fastest code in the game, and we can have a ton of them on-screen at once with very little impact. Yay!

You can check out more about Celeste here :)